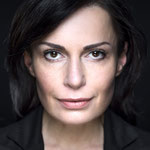 Estefania Miranda, born in 1975 and raised in Chile, received at the age 15 a dance scholarship from the European Council and went to Edinburgh/Scotland. From there, she went on to study dance at the University of Art Tilburg in the Netherlands. During her studies she worked in both Ireland and Belgium as a dancer, and in her third year of study she was offered a contract with the Ismael Ivo Company at the Deutsches Nationaltheater Weimar. She stayed with the company until 2000 completing her degree in this time.

The renowned choreographer Ismael Ivo, head of the International Dance Festival Vienna and the Biennale di Venezia/Dance, and Estefania Miranda are connected through a long history of cooperation. She was a soloist in Ivo’s choreographies, and under his direction the company worked with many other significant artists, such as Gerald Thomas/New York und Marcio Aurelio/Sao Paolo. The most successful productions were “Der nackte Michelangelo” at the Schaubühne Berlin directed by George Tabori, and “Auswanderungen” based on an idea by Ismael Ivo and Heiner Müller. The company toured internationally inter alia to Europe, Brazil, Columbia, Egypt, and Turkey.

During that time Estefania Miranda worked as a choreographer for drama productions and developed her own full-length choreographies at the Deutsches Nationaltheater Weimar. She also held a teaching position at the department of dramatic arts at the Academy of Art in Leipzig.

In 2000 Estefania Miranda became an actress and member of the acting ensemble of the Deutsches Nationaltheater Weimar. She worked with many directors including Susanne Lietzow and Christina Emig-Köning.

A number of projects followed where she performed as dancer and/or actress, at the Schauspiel Hannover, Theater Phönix Linz, Cairo Opera House and with Marina Abramovic in Paris. She also worked for the International Dance Festival Vienna with the choreographer Hans van den Broeck, who is co-founder of Les Ballets chorégraphique de la Belgique.

She was curator of the dance department of Deutsches Nationaltheater Weimar, artistic director and production manager of the International Dance Festival Weimar, that she founded in 2010.

She is director dance of Konzert Theatre Bern and choreographer of Tanzcompagnie Konzert Theater Bern since 2013.