DANCE WITH ME / DNT WEIMAR 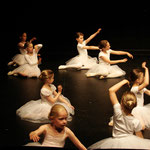 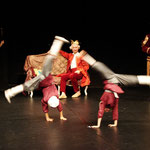 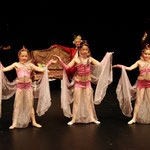 
Snow White is an interactive dance fairy tale, with and for children over 6 years. Dance students let the fairy tale become alive on stage. They scroll in it, as in a book whose pages they create together with the viewers.

After the magic mirror has titled Snow White, the most beautiful of all, the drama about the princess, whose skin is as white as snow, whose lips are as red as blood, and whose hair is as black as ebony, begins. Her mother is not only jealous, but also a witch. It's about life and limb. Luckily, the hunter has a good heart and leaves Snow White in the woods.There she meets the seven dwarfs, with whom she founds a cheerful and musical commune. The queen knows about this through her ​​mirror soon. Enraged she tries to kill Snow White herself. She finally succeeds at the third attempt with a poisoned apple. Snow White is awakened by a prince. He marries her and takes her to his castle.

The socio-cultural project "Dance With Me" follows on the dance project "dance with chance" of past seasons and enables children and young people to express themselves through dance.

Pirvu Tudor, born in Bucharest, completed a ballet training at the Bucharest State Ballet School. Engagements at the Armee Ensemble Bucharest, at the Revue Theatre Bucharest on Gerhardt Hauptmann Theatre in Görlitz and the Deutsches Nationaltheatre Weimar, as a group and solo dancer followed. Since 1999, Tudor Pirvu works as choreographer and ballet teacher for children. Snow White is his first own choreography.

Workshops for school are offered .

This production was created with the support of DNT Weimar.