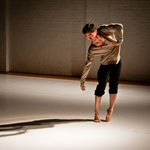 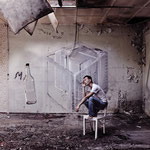 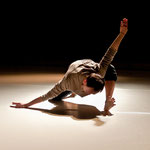 The solo performance Je Sans Paroles was inspired by "Acte Sans Paroles" written by Samuel Beckett in 1956. A man falls into a desert and cannot escape. It seems like he was expelled from a womb like condition, struggling with objects that to him have no specified use. He feels manipulated, out of control, but always compelled to go on with the game.

Je Sans Paroles is a dance and video performance exploring the connections between media and bodily expression. It translates the absurdity of an environment that cannot be understood, a fascinating world where the borders between reality and imagination, logic and surreal, seriousness and humor are permanently shifting. What is the goal of the game? Who is playing? Who is acting and who is observing? The edge of the stage vanishes, the audience could be God, the performer a victim or manipulator.

A co-production of Manège - Scène Nationale de Maubeuge and theater LOFFT Leipzig. With the support of the Centre Culturel de Taiwan in Paris and La Gare de Jeumont Numérique. This production was made possible by a grant from the Fund Lo Manfei Dance of Cloud Gate Dance Foundation, Taiwan.

A haunting music, like the rhythm of a heart, an isolated body, whose limbs cut the air at the speed of combat and suddenly come back to tranquil slowness, light spaces constantly changing: Traverse hits you first with its multiplicity, the space and the layers of the body and its environment, sometimes complementary, sometimes opposing. It is a transcription in movement of a presence whose strength, desires, impulses are emancipating and going through temporal memories. In the oscillation of each moment, Taiwanese choreographer Shang-Chi Sun travels through different states of the body and simultaneous experiences of past and future in space.

A co-production of Fabrik Potsdam, with the support of the Centre Culturel de Taiwan in Paris.

"a minimalist set design reveals a dancer who knows how to take the space. Sun's musculoskeletal system is underpinned by a strong background noise ... This is surpassed only by the precision and strength of his movements that has a unique appeal. "

The Taiwan-born dancer and choreographer Shang Chi Sun worked with internationally renowned companies such as Sasha Waltz & Guests, the Nuremberg Dance Theatre, the Cloud Gate Dance Theatre of Taiwan, the Balletto Teatro di Torino and Toula Limnaios. In 2001 he founded his company Shang Chi Move and created several choreographies, among others "Dialogue II" (2008). In the same year he received the first prize at the 12th International Solo Dance Festival in Stuttgart. His pieces were already shown at international festivals.