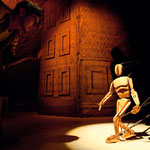 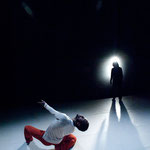 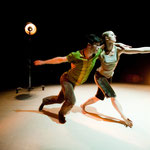 The "dark matter", a phenomenon in astrophysics is the terra incognita of the present. It occupies about 96 percent of the observable universe, it affects development and structure of entire galaxies, but it remains a mystery. This powerful darkness inspired Crystal Pite to her latest work, Dark Matters. For the Canadian, the universe is a metaphor for the human psyche: In both cases there are unknown forces which we only imagine, but cannot access.
The piece is an impressive portrait of the invisible forces that influence body and mind. The beauty of "dark matter" here is embodied by shadowy puppeteers, who are both creators and destroyers. The choreography aspires to the purity and grace of a marionette, who moves - in the spirit of Kleist's essay "Über das Marionettentheater" - between the two poles of free will and manipulation. Besides elements of Kabuki Theater and a breathtaking sound-composition, last but not least, the dancers turn the piece to a touching and eloquent ode to the beauty and fragility of our existence.

Dark Matters celebrated successfully its premiere in Europe and completed an extensive tour through Europe, Canada and Australia. Its creator, Crystal Pite has worked during her career with numerous renowned dance artists. Since 2001 she works and performs with her ​​own company Kidd Pivot, which was awarded with the Alcan Performing Arts Award 2006.