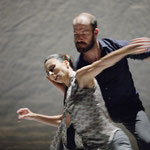 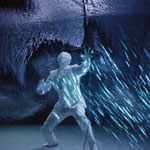 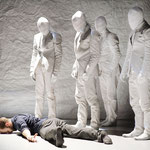 In her new dance piece based on motifs from Shakespeare’s The Tempest, Crystal Pite stages a game of revenge and forgiveness, reality and imagination. Pite explores these motifs in two contexts: a maquette of Shakespeare’s island as a metaphor for isolation, captivity and desire, and a nostalgic cityscape that evokes longing. Chalk-white replicas deliver the essential plot points of the story, but the emotion and tension of the narrative is fleshed out by real characters. To explore and demonstrate this duplication of character and copy, the story and the body requires something incomparably precious: the mastery and articulation of the dancer.

Crystal Pite is one of the internationally most requested choreographers. She has worked throughout her career with numerous famous dance artists. She is working and performing with her own company Kidd Pivot since 2011, which was winner of the Alcan Performing Arts Award 2006. Pite received the Jacobs Pillow Dance Award in 2011.

The Tempest Replica is a coproduction of Monaco Dance Forum (Monaco), National Arts Centre (Ottawa), Dance House (Vancouver) and L'Agora de la danse (Montreal). With the support of Mousonturm (Frankfurt) as co-producer, the nonprofit Cultural Fund FrankfurtRheinMain as sponsor and partner, as well as the Canada Council for the Arts, the Province of British Columbia through the British Columbia Arts Council and the City of Vancouver.