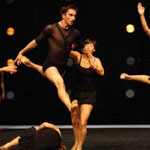 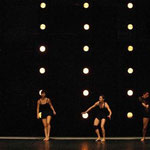 UTF-8 is the most used standard digital code. It serves to unify character codes and is thus of global importance for the Internet. The dancers, choreographed by Sahar Azimi, are confronted with this reduction of complexity. Instructed by voice and light they follow, in a kind of virtual TV show, a predetermined code. It's about obeying orders, about individuality, that becomes increasingly difficult in a society that imposes uniformity and standardization to its members and makes shallow entertainment its highest goal. Azimi confronts the dancers with an enormous challenge: How to use the body and its movements to express the consequences of reduction, standardization and loss of identity and how to overcome it.

"Sahar Azimi is one of the most respected Israeli choreographers, always fresh and original, known for his physical vehemence and his eternal rebellion against any form of simplification."

The Zagreb Dance Company is one of the most important Croatian dance companies. It owes its reputation to the openness to new forms of artistic expression and the unconventional, experimental approach to the medium of dance. It already showed its productions in France, Belgium, Russia, Slovenia, Hungary, Italy, Spain, Portugal, Lithuania, Bosnia and Herzegovina, Serbia, Poland, Mexico, Egypt, South Korea and Israel.

UTF-8 is a production of Zagreb Dance Company in cooperation with Zagrebacko kazaliste mladih, supported by Suzanne Dellal Centre Israel.