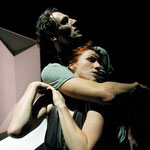 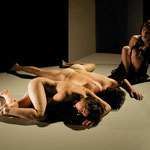 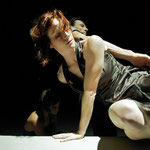 Nude portrays a couple who is about to move to the countryside together. He wants to move on to the following chapter of their life but she decides to make that impossible. She doesn't want to be part of his story. She doesn't want to fit into a preconceived picture of their future. She doesn't want to accept that their relationship will wear out eventually and become predictable. She stops time and literally steps out of the story.
With Nude Pia Meuthen explores once more the limits of dance. This piece inspired by Esther Gerritsen´s novel “between a person” unravels through movement, text and life music, the thinking process of a woman who loses herself in the extremes of her fantasy as she tries to take control of her life. Meuthen creates stories that go beyond the merely narrative. She unravels the thoughts and crawls into the heads of the characters until an exposed picture of them and their innermost emotions is revealed.

Pia Meuthen is 2011 our "Emerging Choreographer". As part of this series, that presents promising young choreographers, there will be, in addition to the performances, a company workshop, an exhibition of photographs of her work and a talk with the audience. Pia Meuthen is choreographer in residence at Danshuis Station Zuid, Tilburg/NL. Her choreography “Unmade Beds” was nominated in 2005 for the Dutch Dance Award "Swan", for best dance production.

"Nude is convincingly danced and acted, seamlessly constructed and powerful in its statement."

"The art of Nude is trapped in Pia Meuthen's ability to make visible that which lives deep in every person."

"... the choreographer moulds enchanting sculptures of flesh and blood ... dance and visual art then melt together."

"Nude is captivating from beginning to end: a good choreography with beautiful duets and three strong dancers."

Dance, drama, text, music and décor - it all comes together in the performances of choreographer Pia Meuthen. With her dance theatre pieces, often inspired by literature, Meuthen creates stories that go beyond the merely narrative. She unravels the thoughts and crawls into the heads of the characters until an exposed picture of them and their innermost emotions are revealed. She does this with refinement and restraint, with attention to aesthetics and with the aim of making an absorbing, accessible, recognizable and, at times, filmic performance that touches its audience. The personal input and the individual character of the dancers is of great importance in the creation of her work.

Nude is a coproduction of Danshuis Station Zuid Tilburg/NL and Panama Pictures.